Just the other day he shocked the word and announced that he was married a chick that was 40 years younger then him with really big pink gums. Then we hear that we was withholding sex from her until the right time, Now I find out that these two are having “problems” and want to take there issues to divorce court to get some advice……

The best thing about this story is the hilarity of it. I have used an except that bossip.com has found in regarding part two of their “2 part” episode on Divorce court. I will also take the initiative to highlight my favorite part. I hope all celebs decide to catch an extra two minutes of fame and take their mess to court tv for the world to see( I rhymed, miss rap supreme here I come). 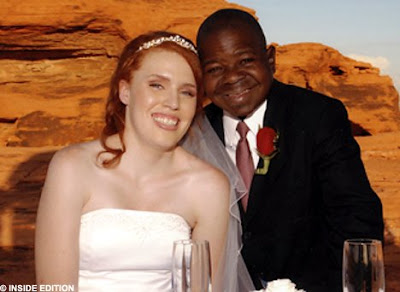 On the conclusion of a two part session of Divorce Court, both Gary Coleman and his wife Shannon Price agreed to come on Divorce Court because they wanted Judge Toler’s marital advice. Shannon says she is tired of Gary’s outbursts and head banging against the wall episodes. Shannon wants Gary to start going out with her instead of staying indoors playing video games and playing with his train sets. Shannon also says she wants to have kids but Gary is not fond of them. Gary says he does not like going out and would rather spend his tine with his train set. Gary also says he does not want to have kids because he does not like them.

ROFLMAO…..hell yea i see why they are having problems, she wants to be an adult and her wants to be her only child (f’ kids). He doesn’t like kids because they are bigger then him. he likes his train sets because they will never hurt him, and he doesn’t have to have sexy time with his train sets…well then maybe he does…I don’t know…But his wife wanting sex is probably putting a lot of pressure on him because he doesn’t have a penis. So many things are wrong in this relationship. it’s bound to end.