Browsing all articles in baby got back Okay maybe she is just a little bit, but for some reason she still doesn’t do it for me. I think it’s because I will always picture her as little Ashly Banks from the Fresh Prince. She gets bare assed for this months issue of KING mag. I don’t know about all the rest of you but…. if i ever make it big my first goal is to get on the cover of KING because King either makes or break you….and no sah i just want to show some booty for the cam, That’s All!! back to Tatiyana, No matter what she does or how much clothes she takes off she will always be Carlton’s baby sister

He Likes them Juicy Not Dry

GAl (gay Al) is back on the prowl and this time he has been seen with a woman the values her juicy curves…I’m guessing this is the reason that he was distancing him self from Dry Jones. he likes his woman/MEN with something other then dry saggy titties to hold on it. 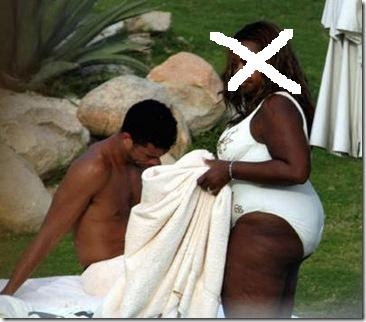 FRESH off his split from Star Jones, Al Rey nolds is back on the town. He hit club Home late last week with a new buxom lady friend, where he was drink ing and dancing till the wee hours. “He was at the bar with her. She was a pretty big girl,” said a cocktail waitress at the club. “They were dancing to hip-hop and bobbing their heads. He had on a white button-down [shirt], open with a diamond necklace hanging out. And he was drinking all night with his pinky in the air.”
source
May 12, 2008   //   baby got back   //   No Comments   //