Browsing all articles in ain’t love a bitch

First Of all y’all leave my damn art work alone… I make do with Windows Paint cause I can’t afford the luxury of photo-shop and all those other fancy things. Anyways this post is not about my artist like skills this is about a bitter wife that has gone so low as to sue HER HUSBAND’s GIRLFRIEND on behalf of her kids smh…

Siohvaughn Wade filed the suit in Chicago this week, adding yet another chapter to the lengthy divorce saga between the former high school sweethearts who separated more than two years ago. She and Dwyane Wade had two sons, ages 8 and 2, who are listed as plaintiffs.

An attorney for Siohvaughn Wade did not immediately respond to an interview request.

“Each and every allegation made is entirely false,” said C. Anthony Mulrain, an attorney for Union.

The lawsuit against Union is the latest twist in a nasty back-and-forth divorce battle that has waged for years.

It alleges Union “engaged in sexual foreplay” in front of the boys, which “severely inflicted the Plaintiffs emotionally and mentally.” It also claims that the boys received “medium size gifts” from Dwyane Wade for Christmas last year, while Union got “the biggest gift of all.”

“Defendant has played sexually explicit roles, including roles as a seductress,” the lawsuit reads. “Defendant has apparently decided to take her role beyond the films and into the home of a married man, Dwyane Wade, in the presence of his two minor children.”

Damages in excess of $50,000 are being sought by Siohvaughn Wade.(source)

LMAO!!! this law suit is hilarious. I only have one bit of advice. Go kick Gabby Union in the face… pay your fine and do your community service. Then hire yourself a shark of a divorce lawyer and GET PAID *CHA, CHING* you got his two big head kids to take care of so go handle your business and leave the pitty bitter hood rat shit to ghettos.

All I can say is you go girl…when you find someone that doesn’t mind that you have less hair then he does, AND he’s a billionaire. I say Kudos to you and well wishes to your future. I’m sure they have nasty sweaty sexy time on a bed of $20 bills…. aside from everything else i don’t know if it’s his money but he’s pretty Hott!! look how he lets her eat his lip off in the second picture. YUM!! The pair’s relationship has become increasingly serious after Naomi introduced Doronin to 12 of her most trusted friends at a dinner party in the South of France last month.

With an estimated £1.5billion fortune, the 46-year-old a property tycoon has a penchant for high-living and beautiful women that has earned him the nickname of Moscow’s Donald Trump.

Naomi, 38, met him at the Cannes Film Festival in May, shortly after the outburst on a British Airways flight that led to her arrest, and they have been inseparable ever since.
One of Naomi’s guests, Brazilian writer Bruno Astuto, said: ‘She said it was love at first sight and he is completely in love with her. Watching them look deeply into each other’s eyes, it was obvious that this is a very serious affair. -source 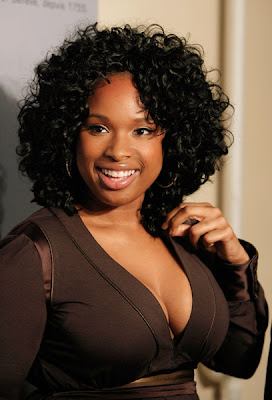 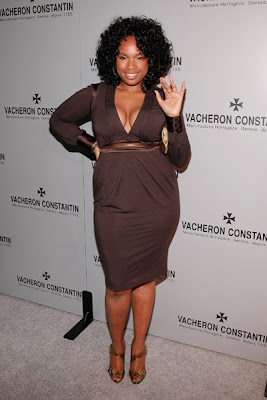 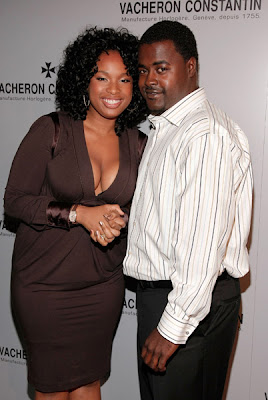 J-Hud and her boo and still together, and i must admit that that’s a SURPRISE to me. I didn’t think relationships lasted in Hollywood. Hell, If I were him I would chock her out before she left me. I got to get paid too. there stars feel like they can forget about the little guys when they make it. he’s pretty whack looking so it must be true love (am I wrong for everything I just said)

This is a Dayum Shame…….I don’t have anything to say Yet……But wait I’ll think of something as the story unfolds. Some sights are saying that she has been suspected of sleeping with her Cuban Cabana pool boy/bartender/personal trainer…..this is the trash that happens when your house is to damn big………if they had a smaller house his big ass could watch her at all times. Ain’t Love a B!tch 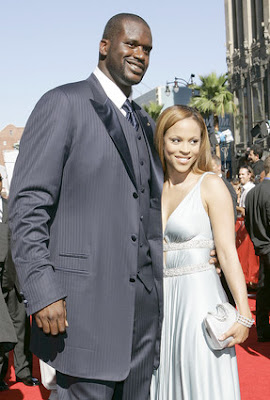 MIAMI (AP) — Shaquille O’Neal has filed to divorce his wife after nearly five years of marriage, his attorney said Tuesday night.
Attorney Ira Elegant said the petition was filed on behalf of the Miami Heat center in Miami-Dade Circuit Court on Tuesday. It was not immediately clear who is representing Shaunie O’Neal in the case.
The Heat did not have an immediate comment, and Shaquille O’Neal did not respond to a request for comment made through the team.
According to the filing, which was first reported by The Miami Herald on its Web site Tuesday night, Shaquille O’Neal is asking Shaunie O’Neal to provide a “correct accounting of all money, funds, stocks, bonds, and other securities” that she had access to or obtained during the marriage.
source
September 5, 2007   //   ain't love a bitch   //   No Comments   // 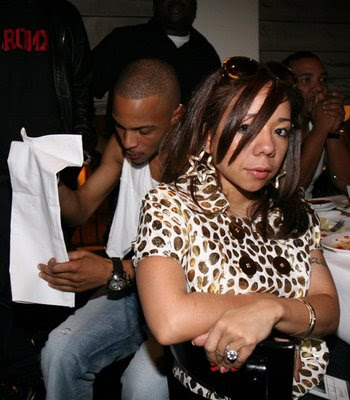 Tiny looks guilty as hell, like someone snapped this picture right after she tried to stuff a crack filled piece of foil paper back in between her butt cheeks.
I read that she has been following TI/TIP around to all of the “Scream Tour Concerts”…trying hard to convince herself that she’s relevant
She reminds me of a dirty little ally dog trying to find it’s purpose in society all the while eating out of the trash *sigh*
August 27, 2007   //   ain't love a bitch   //   No Comments   //

Ike and Tina "The sequel"

Just minutes after Amy Crackhouse and her husband beat each other down, they where seen walking hand and hand like nothing happened. Ain’t love a B!tch!! She even so much as to thank/praise him for saving her life….. Read whole story HERE 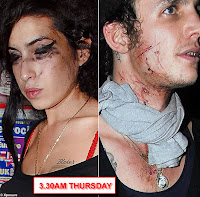 he fight in the early hours of yesterday left 23-year-old Miss Winehouse with blood staining her pink ballet shoes and the knees of her jeans.
Purple bruises could be seen on the side of her neck and her knuckles were swollen.
But her 24-year-old husband appeared to have come off a lot worse – with cuts and scratches on both cheeks and around his neck.

She look like she just emerged from the ally 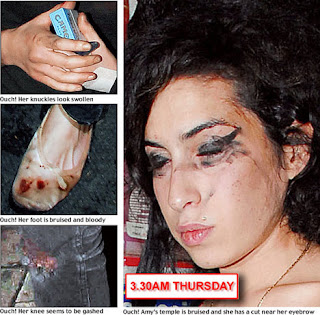 “Amy denied Blake was the cause of the argument, 24 hours earlier after which the 23-year-old singer, who has spent most of the summer in and out of rehab for crack and heroin addiction, was seen with bandages covering her arm, blood-spattered shoes and a gashed knee.
And in a series of texts between the Rehab singer and celebrity blogger Perez Hilton, she defended her husband who she claimed “saved my life”.
Amy told Perez: “Blake is the best man in the world. We would never ever harm each other… I was cutting myself after he found me in our room about to do drugs with a call girl and rightly said I wasn’t good enough for him. I lost it and he saved my life.” 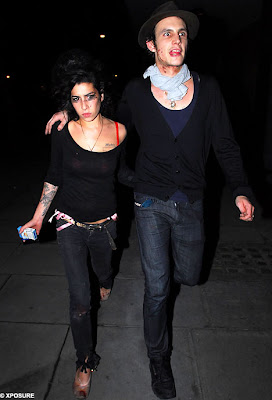 I can’t wait to the Movie comes out : “What’s Crack Got to do with it?”

Kim Porter should put little streaks on blond in her hair if she’s going to act like a stupid little idiot….First of all when you appeared on the cover of frigging ESSENCE mag with Pee-Titty she made her self look like a complete and I do mean COMPLETE fool, by posing in a magazine with a man she know is out there doing what ever walks under the caption “Real Love” come on Kim Porter give me a damn break…..I know i wasn’t the only one that picked up the magazine and said “WHAT A DUMB B!TCH” 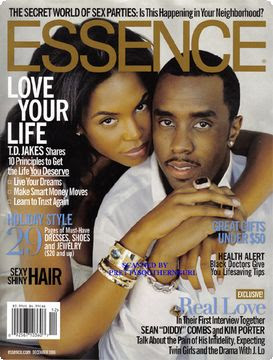 In a recent tell all with OK magazine: (i took the two excepts the pissed me off the most)

On J.Lo’s relationship with Diddy: “It was an embarrassment. I never thought it was real. I knew what was going on with him. Despite what you see in print and when the cameras are flashing, what’s going on in someone’s heart may be totally different. He was still [in love] with me. I never looked at their relationship [as serious].”

in the red part that I highlighted don’t she sound like one of them chicks that are trying to convince themselves that a man really does love them when all along the man is having a public relationship with another chick???? the fact that she opened her mouth to say those words makes me want to punch her in it……While Titty was with Jello he loved Jello and she stomped on his billion dollar receding hairlined heart. When he was with Jello he wasn’t thinking bout you…he was thinking about slamming into Jello at night, not KIMBERLY PORTER all in all… she is skinny and dry as hell, her and Star Jones should open a sun dried fruit shop…and have themselves be the live advertisement.

Regardless in the end….she’s 1.2 million dollars richer. Sometimes it pays to be an a$$