A playmate for JD

Janet and JD have decided that JD really needs someone his own size to play with, often non of the other celeb children want to play with him because they think he’s too small (even his own daughter thinks he’s too little) and they don’t want to hurt him, so they have put there heads together (him on a step stool) and have decided that she will give birth (after her tour) to a child so that JD won’t be lonely anymore. I think that’s sweet and honorable. Good Luck to them and their baby making…. 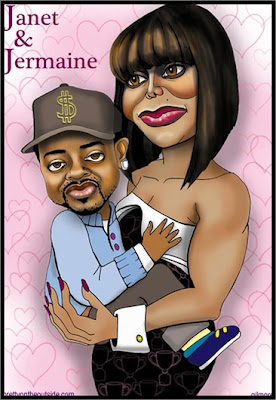 “Yeah, soon,” Dupri told PEOPLE Sunday at a dinner party hosted by New Era and Belvedere Vodka at West Hollywood’s STK restaurant. “Right after the tour.” (Jackson, 42, recently announced she’ll be on the road this fall.)

The producer – who has a daughter, Shaniah, from a previous relationship – is so excited to start a family with Jackson, he doesn’t even care if it’s a boy or a girl.

“It really doesn’t matter,” he explained at the event honoring rapper Nelly. “Janet would be a great mom. She was around so many brothers and sisters all her life, so she’s got to know what that is [like]. And her mom is a great mother.”

Take that Eddie…Scary is out and about doing all kinds of good things. First the clothing line now venturing out on a solo gig, she is going to bring something NEW…. the edge to pop music. *YAWN* I guess I’ll have to wait til Amy Winehouse get off that “shoot em up” before I hear any music that is worth my time. 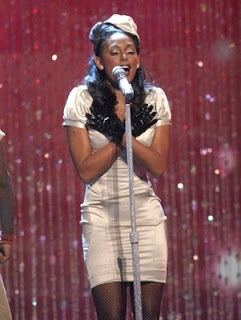 For the last six weeks, the former Spice Girl – a.k.a. Melanie Brown – has been working with uber-producers Scott Storch and Damon Elliott to put together a new solo CD, she tells PEOPLE.

“It’s kind of pop because that’s what I am, but it’s pop with a bit of an edge,” she said Sunday, at the finale taping of TLC’s music game show The Singing Office, which she co-hosts with Joey Fatone.

“I’m about six or seven songs deep into it.”

She said she hopes to release her new CD before the end of the year.


In other Scary News: (story lil oldish but hell)

In shopping around for a picture for the post I came across an article about Scary spice and her big azz titties. 34DD’s… damn those look like they hurt. very nice indeed but hurtful. None the less those hurting boobies are going to land her $1million dollars.


Scary Spice’s real name might end in “B,” but her cup size sure doesn’t. Mel B. and her 34DD breasts will star in the next Ultimo Bra campaign. A disturbingly literal pairing, isn’t it? The Sun reports Mel will earn $1 million for the ads:

An Ultimo source said: “We were blown away by the great shape she is in and desperate to land her. Mel B has never been bigger.” -source 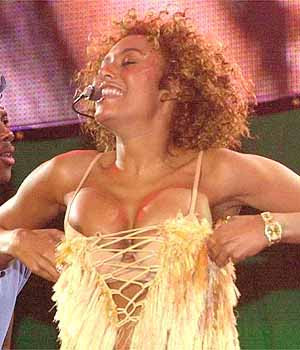 because what in the good heavenly world of Zanzibar or you wearing…..It bothers me that celebs NO Mariah thinks they can wear whatever she want to and it will just be okay…It’s Not and it’s not fair, and it looks stupid. What is is hand doing there….what a slut. 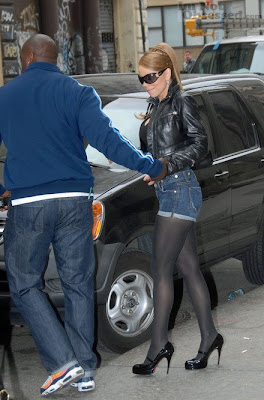 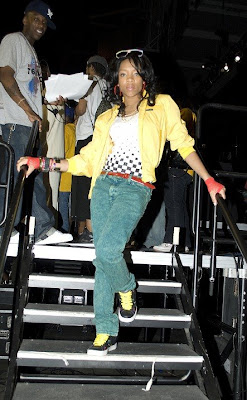 and I decided to throw lil Manma in this post just for good measure. You can NEVER go wrong with stone washed green azz pants. NEVER

No SEX in the bedroom, and Gary says: You can’t make it do it.

I think it is written somewhere in the marriage handbook that you must have sex with your spouse. The fact that Gary has been married for two months now and has not given that girl any of him little chocolate love stick should be punishable with a stint in the federal prison. Okay okay, i’m pretty sure she’s not complaining seriously I think she’s a little over-joyed that she doesn’t have to succumb her self to that amount of torture. Sex with Gary is bond to leave you filled with terror and nightmares. Damn it i’m scared my self and all I have is the morbid visual.
God be with her.

Vivica is going to get me fired!!

sandra rose reports: In the tape, an apparently inebriated Vivica can be seen on her knees servicing a male friend who surreptitiously taped the encounter on his cell phone. Allegedly the man, who lives in Atlanta, emailed the tape to friends who emailed it to Vivica. She quickly forwarded the tape to a friend at the Atlanta police department.

It isn’t known if Vivica filed an official complaint with the police or if she asked her police friend to handle the situation privately.-source

Funny Story: Soooo in trying to get this video clip for my nasty readers, I went there and clicked on some damn link from my work computer and next thing you know I have a damn virus from trying to download some damn porn (not download persae) all i did was click on the damn link…anyways so now because I’m scared to tell the computer help desk that i was clicking on un-work related bullsh!t I’m sitting here hoping that for some reason it will just disappear. Wish me luck or soon i’ll be blogging from home..only good news to that is I’ll be able to post more….YAY

don’t worry your computer won’t get the virus, I’m the dumb ass not you….

The Pressure is on R-Kelly 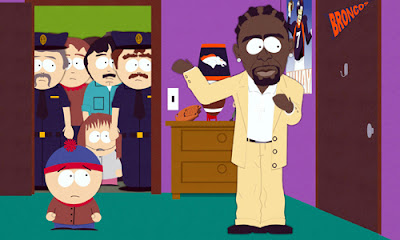 TMZ has confirmed that a judge issued a bench warrant for singer R. Kelly — because he did not show for a court hearing today in Chicago.We’re told Kelly’s tour bus was delayed in Utah, so he was a no show.
The judge in his child pornography case issued the warrant but won’t enforce it just yet. But if R. Kelly doesn’t show up tomorrow morning at 9:00 AM, the judge will tell the fuzz to arrest his butt.
According to the Chicago Sun-Times, Cook County prosecutors pressed the judge, noting he had already shown considerable leeway in letting Kelly travel outside Illinois. “This is just an abuse of the process. It’s disrespectful of your honor,” said Assistant State’s Attorney Shauna Bolicker.
The Judge said a trial date will be set on Thursday. YEAHHH right… we’ll see about that. In the mean time r-Kelly will continue to make rounds pissing on children while singing them precious lullaby’s

Deezlicious is being all she can be

On this months cover of Smooth (they should re-name SMUT) 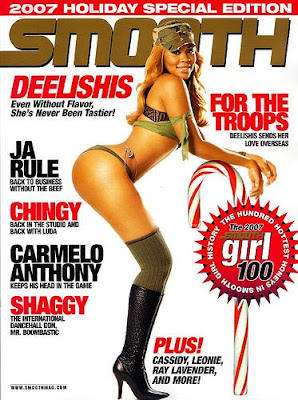 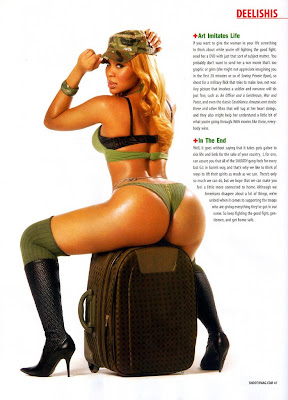 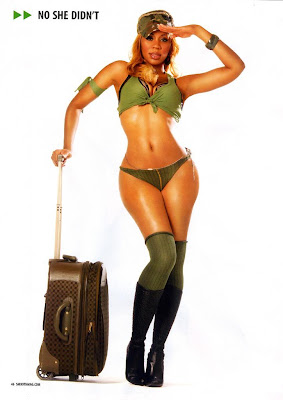 She is every bit of a BUTTA face- everything butt her face is OFF THE HOOK!! a little less ass meat and she’s my dream body…Buffy the body go sit the hell down…..
Sad thing is, she’ll never amount to anything more then a video hoe, and will always be known as the one that let FLAVA FLAV hit!! 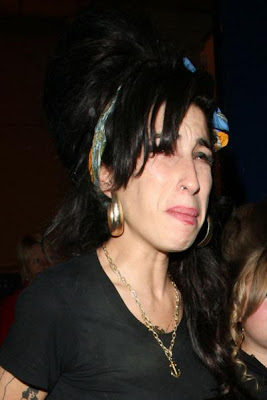 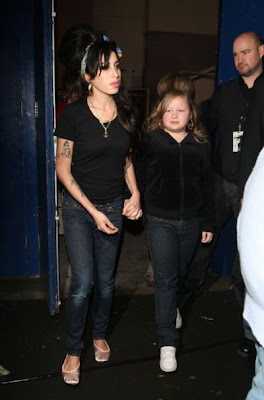 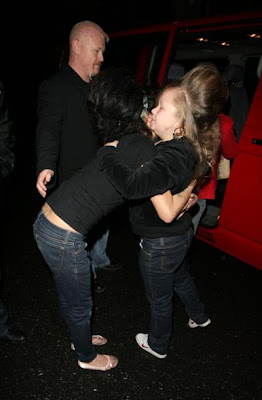 I’m confident that Amy just stashed an eight ball in that child’s hair. I’m holding my FM/AM radio close to my ear so that i can be the first to hear the news report on “Amy hiding heroine in a 10 year old’s hair” wait for it…………. wait for it……………………… 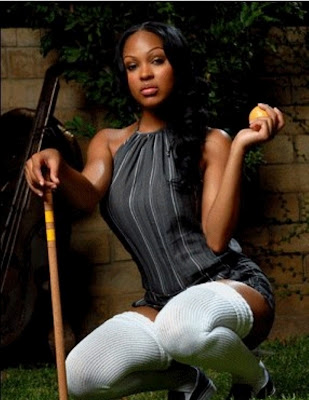 I actually can’t think of anything jerkish to say about these pics, but in my mind, body and soul, I know that something is deeply wrong….. my forehead is wrinkles with perplexity 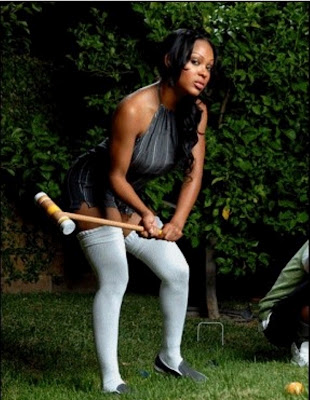 Matel can go to hell

damn thing looks just like her stank a$$, Jay-z’s doll lips are ALL wrong. 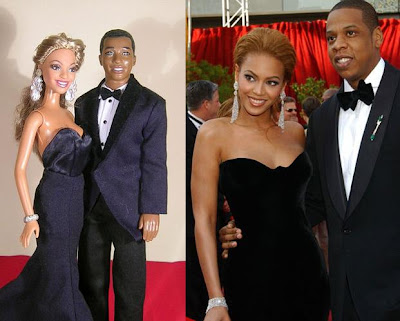 Ain’t this some sh!t….The only way I would buy one of these dolls for my children is if I was about to give them their first lesson in: what happens to plastic when you put fire to it.