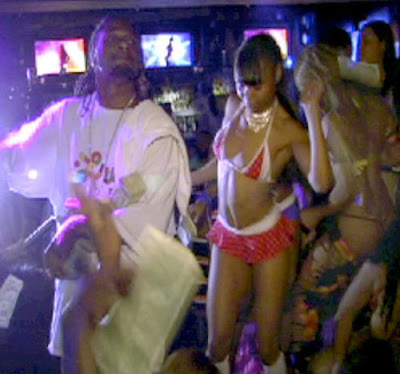 “Jones, dressed in a white jersey-style shirt and wearing a large gold chain supporting a medallion depicting the “Pacman” video game character, had walked into the club with about $100,000 in cash inside a Louis Vuitton backpack. He exchanged $40,000 of that with a club manager for singles. This was in preparation for the celebrities gathering on stage to toss money into the air and in the general direction of dancers — a practice in the nightclub world known as “making it rain.” “

The rest of the story. I shall paraphrase:
Okay, where do I start… The above video was just a few minutes before the strip club shooting back in 2007. Adam “pacman” Jones a player for the Tennessee Titans, has made himself known not only from football, but with his numerous run ins with the law. One back in 2005 for getting into a confrontation with a someone at a night club, and another one just a couple of weeks before this strip club incident for allegedly spitting in a woman’s face.
This incident which happened in early 2007 stemed from him “making it rain” (hence the now surfaced video) and getting mad because the 40 + strippers that were rained on all decided that they wanted to stop dancing and pick up their money. This angered Pac Man, and Jermaine Dupri who was also at that night club during the all star weekend (Nelly was also in attendance, as seen in the video) Jermain Dupri even went so far as to get on the mic and demanded that the strippers stop picking up the money and shake there asses.
side bar: if I’m in a club and someone makes it rain. I’m stopping what ever the hell it is I’m doing so that I man collect my money. I have no issues getting on the floor to pick up 40 THOUSAND dollars (plus) off the floor.
Story goes…. the promoter of the club told the girls to bend down and pick up their money, Pac man got mad and told then to dance instead of picking up the money which sparked a confrontation between (I think) Pac Man’s body guard and a club bouncer… which in turn led to the shooting outside the club which left two people wounded and released and the club manger paralyed from the waist down… I DON’T KNOW… read THIS if you need more detail. This whole thing was stupid. cause if he really didn’t have anything to do with his money. he could have called me and i would have slept with him and maybe even sucked his toes for $40K
July 21, 2009   //   Adam "pac man" Jones   //   No Comments   //