Browsing all articles in elise neal

What happened to 50 and Elise Neal

read what she has to say about her sex life with 50…she seems like she really enjoyed his magic stick. I think she needs to get a life.

What about you and 50 Cent?
What about it? <------ video is a little sexy
Was it serious?
I never talk about that – because honestly I feel that so many people talk about instances where they’ve been with somebody who is famous for the wrong reason. And [50] would be the first person to say that it’s very true about me. I would go left to not be that person that either he or the world would assume that of. I didn’t hang out with him because I thought –“hmm that would get me somewhere.” I’m not that chick.

What drew you to ole Bugsy?
I really enjoyed hanging out with him. We knew each other for quite a while and nobody knew it. I liked telling jokes with him and being silly with him and I like Cancer men, and he’s a Cancer – so it was a basic attraction. It had nothing to do with the fact that he is Curtis Jackson and I’m Elise Neal.

Why didn’t it work out between you two?
We weren’t even boyfriend and girlfriend. I guess I’m a different type of woman. If I didn’t say I’m trying to take this thing further with you and a man doesn’t say I’m trying to take this thing further with you, then I don’t assume [anything]. I stick to what’ve decided. I’m not the kind of person who thinks it’s going to go somewhere because we’ve been hanging out for a year. I’m not like that. I’m like a guy that way. I think things should be discussed and decided on. I enjoyed hanging out with him, and I think he enjoyed hanging out with me (but you’ll have to ask him that). I didn’t expect it to be a “white picket fence” I’m not delusional. -source
June 19, 2008   //   elise neal   //   No Comments   //

Elise Gets into Character 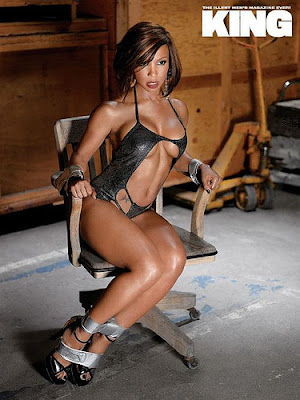 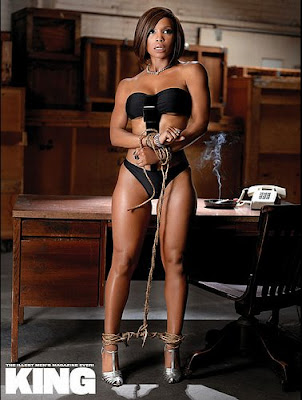 I guess being superhead is a hard blow job…Elise is channeling her inner vixen for the November issue of KING mag.
November 16, 2007   //   elise neal, put your damn clothes on, superhead   //   No Comments   //