Browsing all articles in dancing with the stars

Chis and Usher tribute, where is it????

I wish the chick in the corner would move her big ass head out of the damn way. AND why is the camera man hiding behind the bushes, like a wierdo. Chris brown asked him to follow him …

I said this to my sister the other day. The two people that should have been at that ghetto disgusting mess of a BET award show to pay tribute to Michael Jackson should have been Chris Brown and Usher “fairy” Raymond.To this day (in my opinion) they are the only two people that are talented enough to display the complex dancing sequences of Mjack. Rumor had it that Chris Brown was unable to perform because, Jay-Z said that if Chris did perform him and his wife BeYAWNsay would not be performing. To tell you the truth i could have done without either one of there performances ESPECIALLY Beyonce. Really who chooses to sing “Ave Maria” at a hip hop awards show wearing a fluffy white tooth fairy costume. I know a lot of toothless kids were pissed that night that they didn’t get there money.

Anyways back to what I was saying. Above is a video of Chris Brown at Diddy’s annual white party. you can see him doing little moves to thriller (i think that’s what was playing) and just having himself a grand old time.You can see the talent running through that boys veins. he probably spent countless night as a child watching Michael Jackson’s video’s and copying them on his little race car floor mats. despite that fact that he busted Rhianna all up in her face (who knows what really happened) he is very talented and should have been at the BET award to make a tribute. I hope that Usher and Chris can come together and really make a decent effort to replicate the moves of the late King of POP! that will be the only thing on BET that i will ever watch.

Yesterday i was listening to the radio and one of those lames said something about Kelly Rowland finally leaving Matthew Knowles management. All i could do was roll my eyes and say ABOUT TIME… i feel like she should have walked away from that situation a long time ago. When it comes to a man and his star studded daughter you will never come close to even placing second. Kelly is really talented but it’s time for her to get with the program and start making things happen for the better of herself. 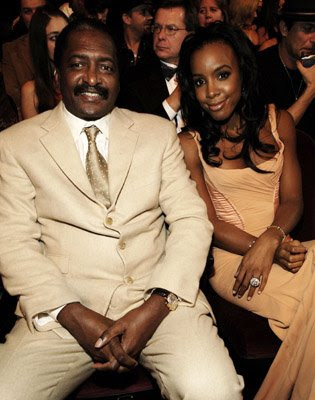 She released this statement: “Mathew Knowles has been a positive influence in my career,” Rowland said in the statement. “I have had great success under his guidance — both as a member of Destiny’s Child and with my solo projects. Although we have decided to part ways professionally, the Knowles family and the entire Music World Entertainment team will always be my family.”

This might relate and this might not, you take it the way you want to take it. Some people give all of there time and loyalties to the wrong person. You expect that person to treat you the way that you ought to be treated and in the end you end up disappointed, bitter, and angry. I’m sure that this separation between Kelly and Matthew’s management did not go down all sweet and humble as pie. She finally got pissed off because everytime something good happened for her… BAM!!! here come Beyonce with something 10 times better, be it a secret underground wedding, a broken toe, a new color change on her fingers, or anything else for that matter. Kelly could in no way compete with something or someone that would always just out shine her. It happens to us everyday, we try to keep our dignity while always coming out last.

And that hurts, when you invest time and energy into something you want to see it work out for you. you want to reap the rewards of your time and your sacrifice. when that does not happen it kills you inside. it’s not fair, but so aren’t a lot of things in life. it’s how you choose to deal with that heart break or as i like to refer to it now as WASTED TIME that makes you a better person. you can choose to deal with it head on, try to work it out and stay in the back ground just barely getting by or you can pick up your pieces and move on. if you choose the latter, you may have to start out from the bottom again, but this time you are starting for yourself, make the decisions that only you can make. Make sure that no more time is wasted and that you will come out victorious. for a while you might even sit there and get upset because now that your doing better you think about all the wasted time and get mad thinking that you could have been doing this a long time ago, but like Kelly your loyalties were for some one else and not for yourself.

It’s about time that we start making the necessary moves in our lives to ensure that are happiness is first priority, that our success in any situation is at the forefront of our minds. Stop stepping aside and clapping at someone elses achievment over yours when you should be the one getting the praises. weather it be at work or in a relationship, with any thing… it’s about time that you shine. because how can you make someone else happy if you are not happy yourself. think about it….

Joy Bryant Gets Down

She never really does it for me, but there is something about a girl who knows how to get down that’s really cool. looks like the white dude really had her going (play the funky music white boy). OR maybe she was just drunk..your know that drunk point: where you just want to laugh at everything, and be free with your inner humor soul. 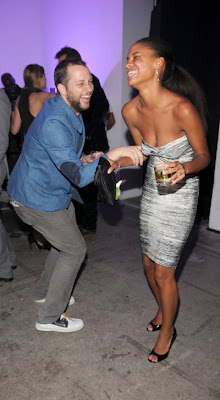 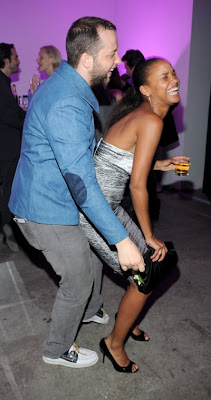 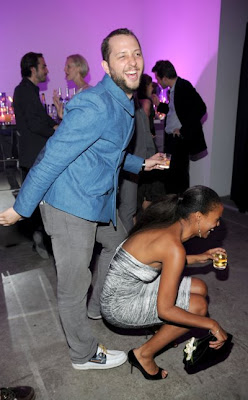 Yup she’s drunk…I sure she needed help getting back up, when your down that far in dress that tights your limbs are pretty constricted to your immediate position. Good Times!!

I didn’t know that Estelle could get down and dirty like that. She’s all up and in this man (who the hell is he anyway) and I want to know why the hell celebs always feel the need to pull some random on to the stage to dance with them while they sing. That ain’t no real dance. All he’s doing is trying to cop as many cheap feels as he can so he can go home and tell all his boys that he was feeling up on a STAR.

It’s worst when the woman get on stage cause first of all they don’t have no clothes on anyway and having a celeb pick them out of the crowd makes them lose all regard of self respect and next thing you the the audience is face to face with a big pair of wet drawers. EWWWW!! 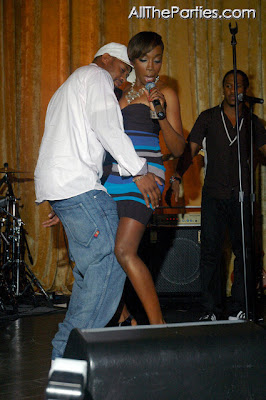 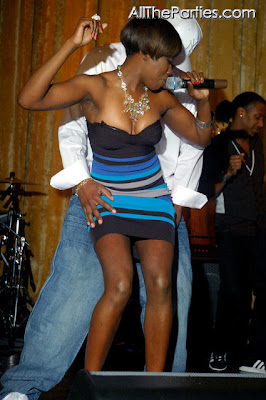 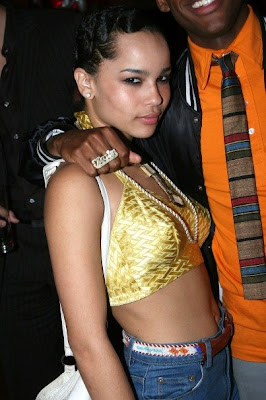 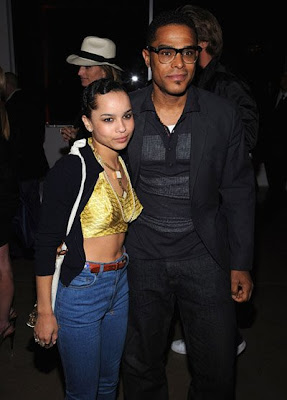 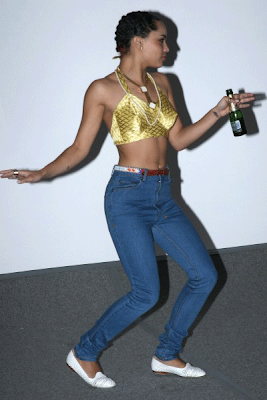 Go Zoe it’s your birthday get stupid…..or look stupid…whatever you want it’s your choice. I just don’t understand this girl. it’s almost like she does this to me on purpose, but I’m glad to know that she knows how to get down and have some fun. it’s funny how she still ain’t smiling. I think she’s depressed.

Oh yea…and her foot. Who the hell breaks their foot right before they start their stint on Broadway??? it’s not like she even had anything else going on….Just be careful, damn. Her money stopped being made before she ever started. Shame! 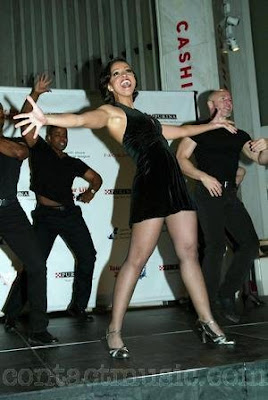 R+B star MYA’s Broadway dreams have taken a big hit – she has been forced to postpone her debut in CHICAGO with a broken foot.
The Grammy Award-winning star was slated to begin a nine-week run as Velma Kelly in the hit musical on 12 May (08).
Producer Barry Weissler says, “Speaking for the entire Chicago creative team, we all wish her a speedy recovery, and look forward to experiencing her portrayal of Velma Kelly as soon as possible.” -source 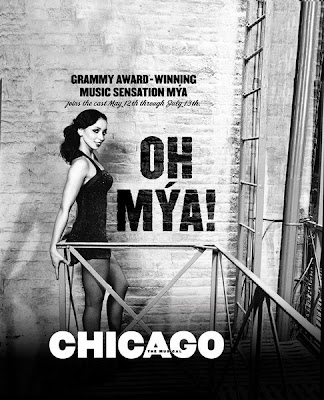 Oh Mya….Why did you break your foot???

I wish Usher wasn’t such a lady… he really has a lot of talent and puts on a great show. but I guess that’s what most ladies do. If only Tameka would let him hold his own balls for a little while longer he could really come back to do greatness. All the foolishness that he’s been doing has opened up the Golden gates for Chris Brown to come in and take over, and all Usher can do is sit and watch. Once Usher man’s up, him and Beezy should get together and show these little two steeping ammaturs what entertainment is really about.

Check out this clip from some random myspace dude: he did a bang up job!!

Usher has hailed fellow singer Chris Brown as a younger version of himself – insisting the star will “follow the same path”. Usher, 29, was just 15 when he released his self-titled debut album in 1994 and has gone on to forge a highly successful music career. And Usher is convinced Brown, 19, is all set to follow in his footsteps and dominate the R&B scene.

He says, “All of this young energy is great for the industry. Chris is the guy who dances and sings, which is a lot like I do and did as a young artist as well. If time serves us correctly, and artists are continuing to better themselves, then hopefully he’ll follow the same path that I did.”

Karina Got Mario’s nose wide shut (PUN INTENDED)….they say nothing is going on yet they be clubbing and taking lil cute myspace pictures together. maybe they are trying to gain America’s votes by pretending to have something going on. or maybe he’s really hitting it and trying to play that Chris Brown and Rhianna “we just BFF/dance partners” role. they could be clubbing together to brush up on dance skills like in that movie “dance with me” I could be just making ish up…who knows??? 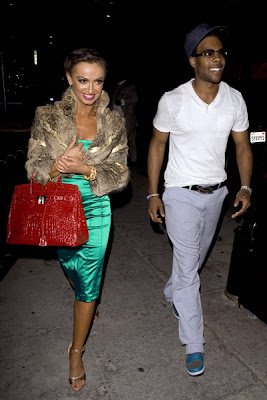 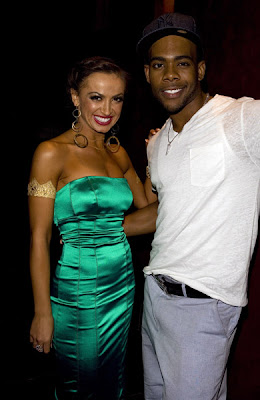 I’m am deeply perplexed with trying to figure out how she breaths through that nose. 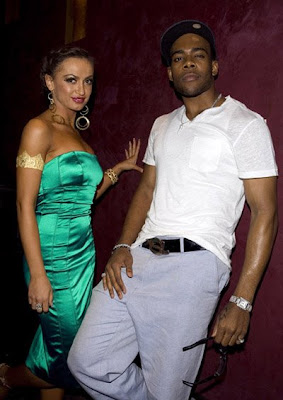 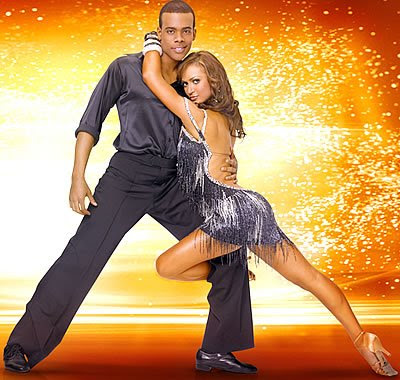 Last night Status Quo did another bang up job dancing. I was disappointed that Live in color went home because fysh and Chicks suck azz, if you don’t know what I’m talking about i suggest you tune in every Thursday or just come here and I’ll tell you all about it. Status Quo needs your help again to keep them out of the bottom. So vote here. Boston even if you don’t watch the show vote for them anyways it’s time we get some fair representation….cause Bobby Brown ain’t cutting it.