Browsing all articles in You need to stop

"It" Runs for City Counsil 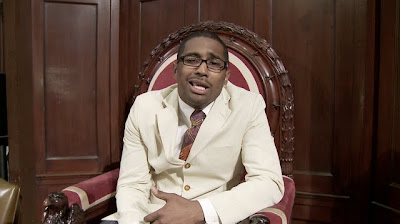 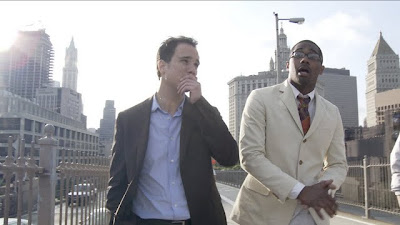 KWAME SMALLS also know as “IT” from VH1 Reality Shows I Love Money 2 and I Love New York 2) has been put on the Democratic ballot for City Council member in the 26th District of Queens. (Which includes; Maspeth, Long Island City, Sunnyside, Woodside)

“I’m running to represent those with disabilities and also to show minorities in my community that we can run for political office and make a difference instead of being on the street” Says Kwame Smalls who suffers from Retinitis pigmentosa.

Smalls, his Campaign Manager, I Love New York 2 winner and I Love Money 2 runner up George “Tailor Made” Weisgerber and a team of volunteers canvassed the district for 5 weeks in June and July. They were able to obtain signatures in excess of the number required by Election Law demonstrating that the community supports Smalls’ candidacy. -source

I’m all for equal opportunity but COME ON!!!!

" Put your lighters" up for the death of music 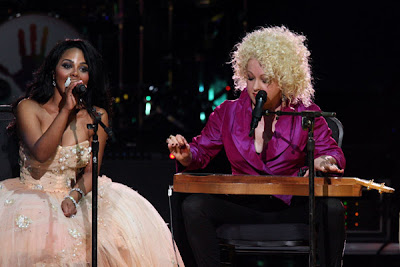 Lil Kim and Cindy Lauper did a ear numbing performance on Saturday at the Mandela Day concert at Radio City Music Hall in New York City. The duo performed a medley of Lauper’s hit ‘Time After Time’ and Kim’s ‘Lighters Up’. Blame it on Age, but Luaper sounds like hell and Kim sounds hell bound. Not only was the medley awful but it was random as hell. In music everything is possible… but this… should never have been attempted. I actually tried to sit through the whole thing, but somewhere after the one minute mark I gave up and granted my ear holes some peace and quiet.

Lil Kim and Faith have still not gotten over the fact that they were played by the NOTORIOUS BIG… although I don’t doubt that he loved them both in his own way, he still played them none the less. Faith had his babies and gave him babies. Kim stood by him through everything. At this point they both need to let it go and move on, Biggie is GONE (R.I.P). “he said/she said” that at Diddy’s annual wear white party (A charity for malaria) Wifey and Matey were there and soon yelling and squawking commenced as the two exchanged kind words full of venom (I actually do mean kind words lol) Kim was and is still upset at the kind of person she was depicted as in the the Notorious movie, which Faith had a very heavy hand in creating. Kim feels like she was made to look like a fool in the movie… 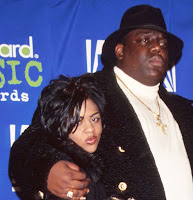 “They were disrespecting me terrible in that script but the one that sticks out to me was in a scene allegedly when Ms. Wallace came to see one of Biggie’s shows for the first time and I was supposed to be so mad at him about something that I pulled my panties off on stage and mooned the crowd with my p—-. What the f—?! Come on, don’t you think that would’ve been in the history archives? They’re using Lil Kim to sensationalize their bulls— lying’-a– story. That was the last version of the script I saw, which somebody had snuck to me, ’cause people didn’t want me to see it…It’s crazy ’cause she and I lived together in Biggie’s house for almost eight months after Biggie died. On top of all that, out of the kindness of my heart and the love I had for Biggie, I share five percent of my publishing with Ms. Wallace; just out of love, making sure that if I ate, she and the kids ate. I’ve had enough and I’m about to expose them both. … I’ve been quiet for a long time,…I’m very disappointed in Faith. There’s nothing Faith or Ms. Wallace could do to stop me from reppin’ B.I.G. all day. I’m gonna always do that. … It’s time for Ms. Wallace to be exposed.” source

This all built up and resulted in the below Quote from a source at the party…. 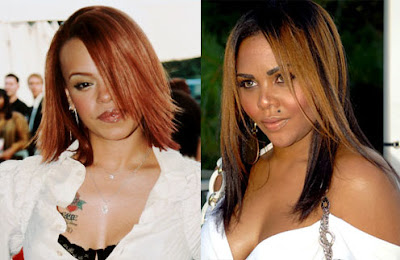 “It was really heated,” one source said. “It was about to pop off…there was crazy screaming.” According to sources, Faith was saying, “ I love you” to Lil Kim and Kim responded with “God bless you.”

However, later at the event, Kim asked Faith, “How would you say you love me when you trashed me in your book?” Under anonymity, a source told AllHipHop.com “We know that [Faith saying 'I love you'] is bulls**t.

It wasn’t even about the movie. It hurt Kim that she was being fake.” Actor Dennis Da Menace, who played D-Roc in “Notorious” and Devante Swing of Jodeci fame were able to prevent a potentially violent exchange between Faith’s husband, Todd Russaw, and Choke No Joke.

“At first it was cool, but then Dennis had to peace it out,” another source said. Russaw reportedly attempted to take pictures as Kim and Faith spoke peacefully, to which Choke took exception. -source

Seems like both of these ladies need a glass of water and a nap… I love the insults “I love you” and “God Bless you” LOVE IT!!!!

Oh Just stop, I’m sure many of you have seen this video floating around in your email boxes or your facebook pages but I thought it was just too funny to not pass along. Apparently this long time annoyance to society decided to fake a heart attack in order to cause a mis-trial (story below) As you can see from the video he concocted the plan that after he had his heart attack he would be un-conscious… even after the correctional officer puts the ammonia under his nose, in which he wakes up only to go unconscious again.

Now once apon a time I was a fast one and made the choice to have some fun and smell one of the ammonia sticks and those things actually really do rattle your brain, it stings and bring tears to your eyes. so that man in a mess for faking unconsciousness again right after someone just jump started his brain with one of those. LMAO!! I love black people

The sentencing capped off a week of Wilkins’ antics, which frequently caused Huffman to clear the courtroom. At one point he began yelling about lynchings. On Thursday, he apparently faked a heart attack, collapsing to the floor while uninterested observers watched. After the “attack,” during which medical personnel checked him out and found nothing wrong with him, Wilkins sat in a chair, pretending to be unconscious. When a deputy put an ammonia stick under his nose Wilkins responded, opened his eyes, then went back to feigning unconsciousness.

Wilkins, 33, who has an eighth-grade education, successfully represented himself before. In March 2005, a jury acquitted him of a different felonious assault charge, but a judge convicted him of being a felon in possession of a weapon. Last week, Wilkins represented himself again, and a jury convicted him Friday of two counts of felonious assault, being a felon in possession of a weapon, firing a gun into a habitation. He was also convicted of gun specifications, which added three years, and of being a repeat violent offender, adding 10 years to his sentence.

Huffman had appointed an attorney for Wilkins for last week’s trial, but Wilkins said he declined “because I don’t trust you or your court.” (<<<>

Get it together Kanye

Out of damn control Kanye pissed off his fans last night when he couldn’t stop showing off with all the glitz and glamour of his stage set up. This is NOT the first time I have heard of fans going out of there minds because of the carp Kanye puts them through just to see one of his shows.

At the last Monster Jam in Boston Weezy “wtf” Baby had to cut his performance short because Kanye took all day and all night to take down his set with his over the stop stage bulldodo. I have heard that Kanye’s show is something to see but i don’t have that much time in my life to be waiting for the set up and set down of some damn equipment. Kudos to you who have two hours between songs to wait. That’s why there people boo’d his azz while he was on stage. 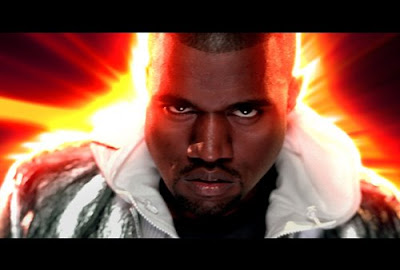 Kanye West heard it loud and hard from fans who got seriously irate when the rapper showed up two hours late for a gig.

West was supposed to start his gig at Bonnaroo at 2:45 a.m. yesterday morning, and when he didn’t show up until 4:25, the crowd got on him, chanting “Kanye sucks” and throwing glow sticks on stage. The delay, according to reports, was caused by K’s big stage set, which took a while to throw up after Pearl Jam’s appearance.

As it happens, a lot of fans just couldn’t keep it up for Kanye – and ended up asleep in their sleeping bags. TMZ

My mouth stayed open the whole time, I couldn’t believe that i was watching such a talentless plastic, high booted foolishness. I kept saying to myself ” I wonder if they understand how bad they sound” ” I wonder if they know that a million people are dying from their off note tunes and ridiculous dance moves. I’m not even going to get on the outfits because my finger I don’t have the strength to fully explain my hate and anger

These dance shows need to pick their entertainment more wisely because it it weren’t for the dancing of the actually contestants that the pussy cat dolls would have been the death of that show. I mean i have NEVER EVER witness such plum foolery.

It’s never okay to walk anywhere or do anything besides be in the confinement of your own house looking like this. Second that outfit can’t be comfortable with those faded spandex lodged between your bottom lips. She seems to be oblivious to the fact that she is a curvy girl and that sometimes things like that are not looked upon highly. I love J-Hud but she seems to always drop the ball when it comes to wardrobe choices. Her stylist should be shot. 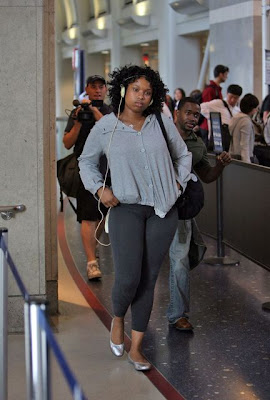 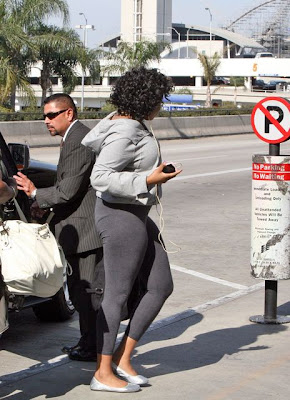 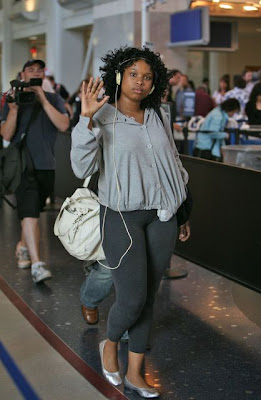 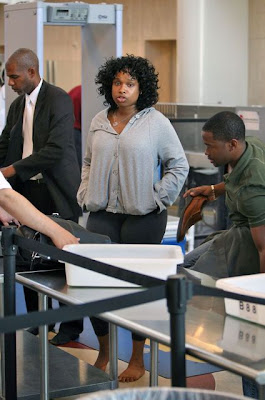 Call me so i can make it sweaty for ya…. 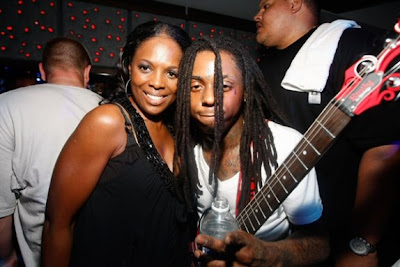 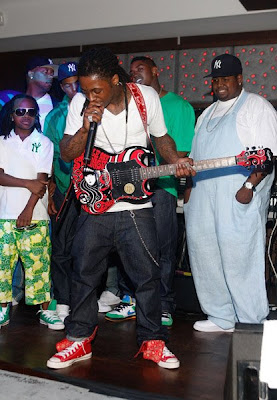 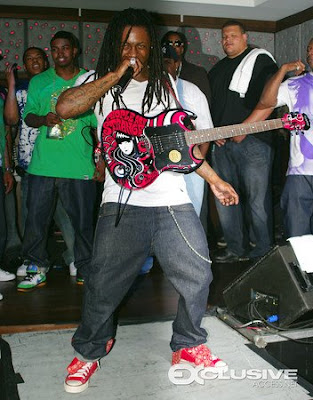 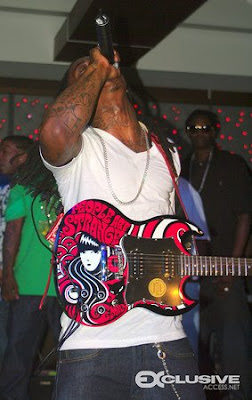 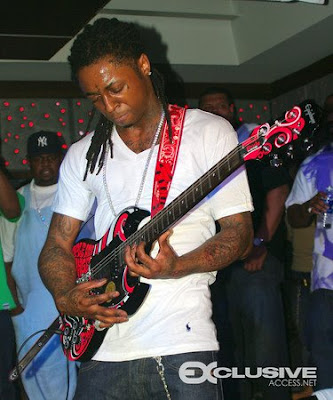 Lil Wayne and his expensive Gui-Tar perform at the BMI Unsigned Artist Showcase, and you can really tell he’s feeling the groove.I’m 100% certain that he has NOT A CLUE about what to do with that guitar… necolebitchie has footage of him playing his instrument and singing over his own song sounding like a miserable Hott frolicking mess.

I don’t think i can Stand Wyclef

It’s something about being extra when you don’t really have to that bothers me. I guess Wyclef has always been a bit extraterrestrial but….I just don’t know. Here he is sporting the wig of storm from The X-men. I guessing there was a point to this look, a very dull one at that. 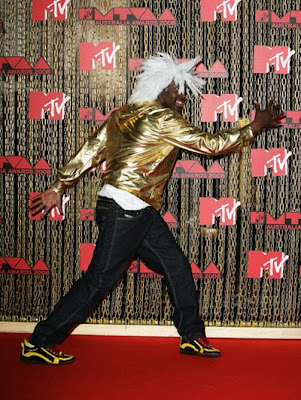 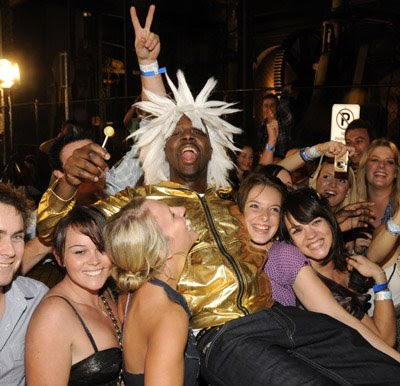 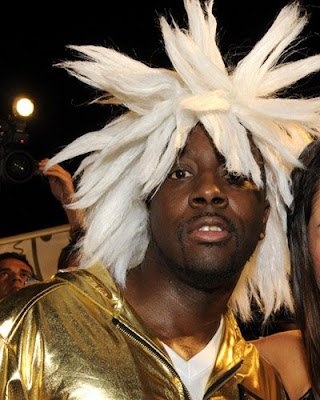 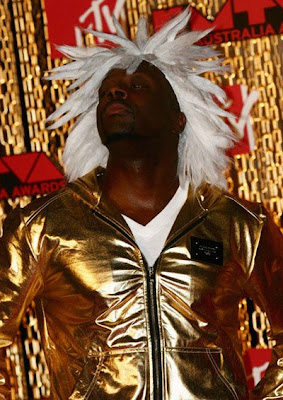 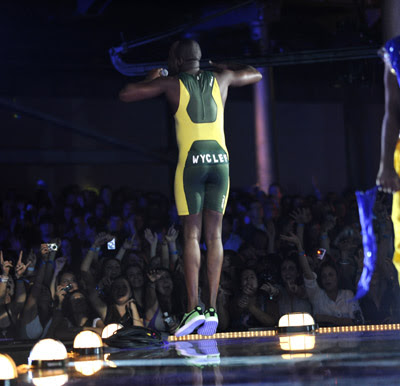 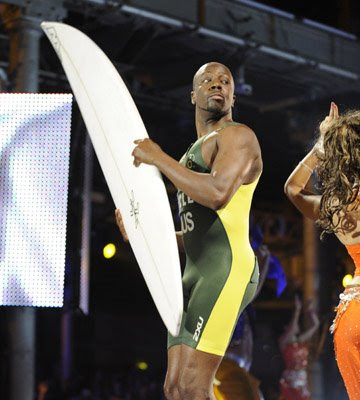 Here he is looking like a Penis with a Speedo on. Peep the little bulge in the front. Hmmm??

Somebody needs to be slapped

Cause it ain’t NEVER that serious. Usher was on set of TRL and some little over zealous fan damn near gave birth. I wish my interest in someone made me hyperventilate in the presence of a STAR… 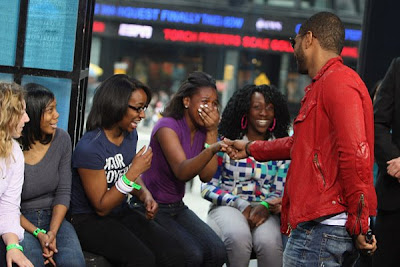 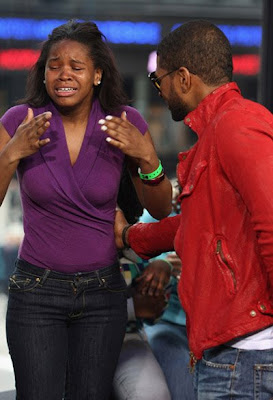 She should have been having a fit because she didn’t wear a damn belt which i might say is a very important yet understated accessory that people (mostly woman) underestimate. A belt can really do a lot for your outfit. it adds a certain flare and pizazz to your ensemble. but i digress 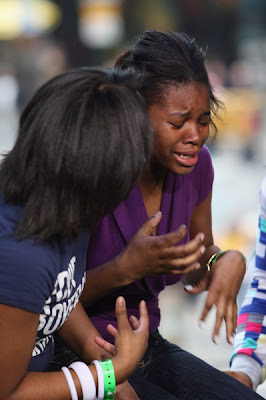 This is just out right ridiculous I would like to know why someone, her friend, usher, Tameka, didn’t give a damn enough about this lil girl to slap that Sh!t out of her. 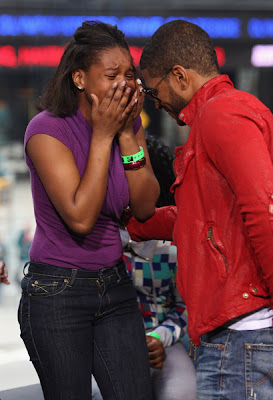 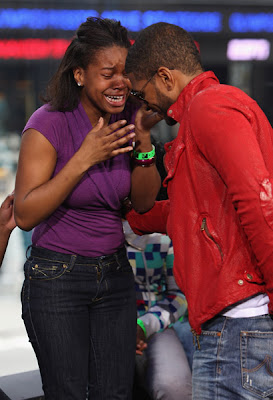 But then again i would do the same thing is I saw………(Got it) Flavor Flav at KFC. I’d wipe my finger on my jeans and just start screaming and hollering…Start struck at it’s best.