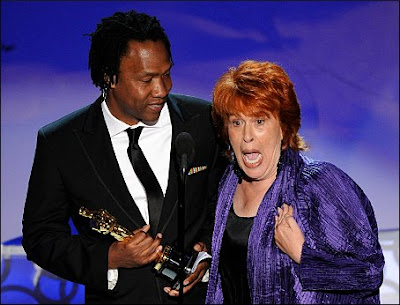 This is some Funny stuff

When Kanye basically ripped the self esteem and grammy out of Taylor Swift’s hand we heard it all over the world. Twitter went ape shit, Facebook had to shut down for 3 minutes because status msgs were Out of Order (I made that one up) and my phone didn’t stop ringing from people asking me if I i just saw that Nigga Kanye did on Stage. Some laughed some cried, and Obama called him a Jack ass. I merely rolled my eyes and said Kanye strikes again (then I blogged about it)

In this turn of events… The Kanye of The Oscars some lady named Elinor Burkett who actually did win the Oscar KANYED her co-producer Roger Ross Williams (who also won) when she stole the spot light away from him in the middle of his speech. (see video above) I guess what had happened was: They worked on the movie “Music by Prudence” together and had a lot of differences of opinions on the direction they wanted the film to go in. A year before the movie was finished Elinor decided to remove herself from the project. So………. fast forward to The 2010 Oscars. As Williams went on stage to accept the award, a few minutes later Elinor waddles up to the stage and grabs the mics spits on him (I made that part up) and proceeds to give her own acceptance speech. It was a great way to bring some LIFE and Juice to the otherwise boring as hell Oscars. It was a little different then The West/Swift moment but Williams def got KANYED