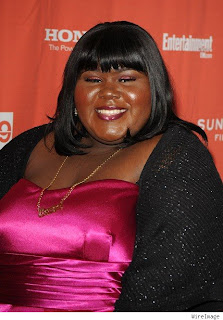 But he definitely is FUNNY, I was going to post this Yesterday but in lue of HAPPY BLACK GIRL DAY I saved my thoughts about this for today. Go back and read my Happy Black Girl post to lift your spirits before you start to read and or listen to what Howard Stern and his co-host had to say about Gabby Sidobe

“There’s the most enormous, fat black chick I’ve ever seen. She is enormous. Everyone’s pretending she’s a part of show business and she’s never going to be in another movie,” he said. “She should have gotten the Best Actress award because she’s never going to have another shot. What movie is she gonna be in?”

He and co-host Robin Quivers went on to discuss the impossibility of Gabby finding any work in Hollywood after ‘Precious.’

“And Oprah’s lying and saying you’re going to have a brilliant career,” said Robin.

“Oprah’s another liar, a filthy liar,” said Stern. “She’s telling an enormous woman the size of a planet that she’s going to have a career.”

It looks like Gabby will prove Stern wrong. She is lined up to appear on the new Showtime series ‘The C Word’ and her next big-screen appearance will be opposite Zoe Kravitz in the drama ‘Yelling to the Sky.’source

Oh Lawd, Listening to these two, I couldn’t figure out weather or not it was appropriate to be laughing. My heart was torn between doing the right thing and thinking logically. No doubt about it, Gabby is BIG, I mean she is really Big… but I do NOT believe that her career is over. I DO believe that she will some how be type caste to play that “fat girl” in any role that she gets. They say that she has a couple of movies lined up now. So she isn’t done. I can’t wait to see what he future holds. Howard Stern and his co-host had some very interesting points, but we can only hope that they are hilariously WRONG!! Good luck Gabby