Bobby Kris tries to Kill her self

You would have to be a fool to not know that something like this would happen. The National enquirer reported the news which i can’t take to seriously but it’s not a far fetched story. This girls is under a lot of stress. her dad is trying to right a tell all book about his life as a crack head and her mother is dating a 5 year old. This girl has no other choice but to lash out and try to stab somebody…Hell I would have been locked up in the white coat of restraint in the padded walls of glory if i was her 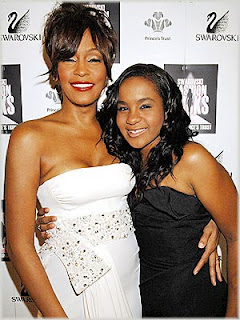 Whitney Houston’s 15 year-old daughter Bobbi Kristina tried to stab her mom during an argument – and then attempted to kill herself by slashing her wrists! The shocking suicide attempt landed Bobbi Kristina in a psychiatric ward in Atlanta, sources said. Ann Davis, a family member said that a few days before Bobbi’s 15th birthday party that Kristina “tried to stab Whitney” before turning the razor on herself. Davis confided that part of Kristina’s problem is that she doesn’t want to live with Whitney.” {national Enquirer}
May 1, 2008   //   bobby brown, whitney houston   //   No Comments   //